A recovery but an uneven one

The OECD, in its interim forecasts published on the 7th of March, continues to count on a modest recovery of the global economy. After being stuck for five years in a low-growth trap, global GDP growth would pick up modestly, from 3% in 2016 to 3.6% in 2018. The OECD explains this recovery by the boost in demand that is coming from fiscal initiatives in the major economies (US, China, Canada) along with an ‘easier’ fiscal stance in the euro area.

Looking beyond the global averages, it appears that the global recovery is driven by the US, and to a lesser extent Canada along with Brazil emerging from recession. Meanwhile, the euro area and Japan remain stuck on a rather weak path of growth, with the UK expected to be join them. 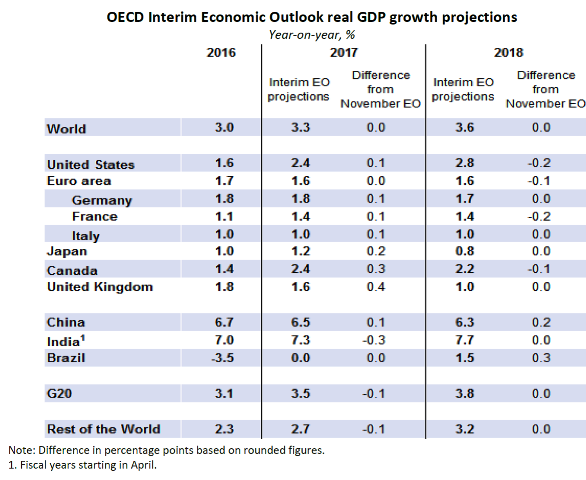 While the OECD considers a global GDP growth of 3.6% in 2018 as being too low as it is much below the historical average of 4% in the two decades, a long list of risks that could derail this modest recovery is also being added:

To exit the low –growth trap in a durable way, the OECD continues to recommend some fiscal stimulus which is then to be combined with an agenda of structural reforms. Concerning reforms, much focus is put on the coherence of policy packages, the idea being to undertake reforms that increase trade and competition together with active labour market policies, investment in skills and changes to labour market regulations.

Furthermore, the OECD text refers on several many occasions to the need to make growth more inclusive and to ensure benefits are fairly shared. Here, it is claimed that “all countries” have room to restructure spending and tax policies so as to towards improve education, increase public investment, increase government effectiveness and family benefits while decreasing public subsidies.

OECD is not always so clear on fiscal policy

In its previous forecast (November 2016), the OECD was using the assumption that the incoming US administration was to inject a fiscal stimulus of 1.75% of GDP by 2018, thus raising US growth to 3% in that same year. It is not clear what exact assumption on US fiscal policy is now underlying the new forecast but it is likely that a more modest expansionary fiscal stance is behind the downgrade of 2018 US growth (from 3% in the November forecast to 2.8% in the present one).

Concerning the euro area, whereas on previous occasions the OECD was advocating the use of a “golden rule” for public investment in the Maastricht criteria, along with suggesting linking the ECB’s operations of buying of sovereign debt with criteria on public investment, such ideas recommendations are currently not repeated.

The approach is instead to simulate the numbers of years during which a permanent public investment increase of 0.5% of GDP can be funded with deficit finance (see graph below). 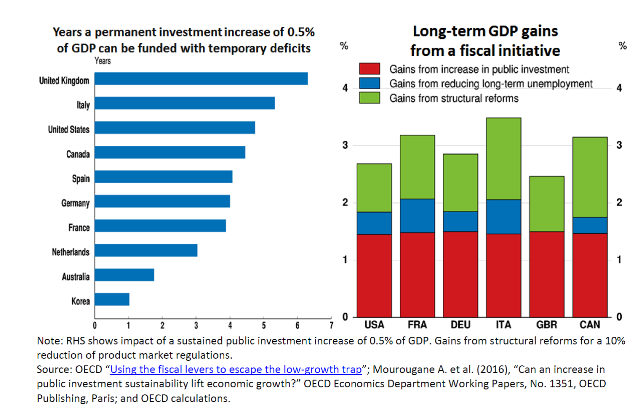 Reforms but what reforms exactly?

While a reform agenda, together with the need to pursue inclusive growth, are regularly quoted, it is not clear either what type of reform agenda this implies in particular for labour markets. References such as “improve labour market policies in a way that raises overall incomes and shares the gains widely’ (page 2) or ‘changes to labour market regulation’ (page 12) are in the end are general. A tip of the veil may be lifted by looking at the formulation on page 9 equating a fair sharing of the benefits of trade with the ‘reduction of obstacles to the process of reallocation and transition for workers’. This seems to refer more to the traditional agenda of looking at labour market institutions as being rigidity while at the same time overlooking the crucial role institutions such a collective bargaining play in keeping rising inequalities under control.