The OECD released its Interim Economic Outlook on 19 Sep. 2019 with updated figures on the low growth across the OECD area, including a third consecutive downwards revision of the forecasts for 2020 and warning signs across the board from Brexit to China-US trade tensions. Governments must do far more in terms of fiscal stimulus; monetary policy alone will not deliver on growth.

In line with the Economic Outlook of May, the Interim Report confirms the rather dark forecasts on weakening growth across countries and predicts even worse figures in the future. G20 “advanced” countries were predicted (based on November 2018 and May 2019 forecasts) to have growth rates of 2.1%and 1.9%, but in fact only achieved growth rates at about 1.6%. The predictions were even worse for emerging G20 economies with only 4.6% growth predicted for 2020 against earlier forecasts of up to 5.2%. The US is projected at +2% growth in 2020, Japan at +0.6%, the UK at 0.9%. Within the Eurozone (+1%), Germany (+0.6%) and Italy (+0.4%) are particularly exposed to the impact of trade tensions. France is comparatively expecting to do well (+1.2%), thanks to the social protection and income support triggered by the “yellow vest” movement. 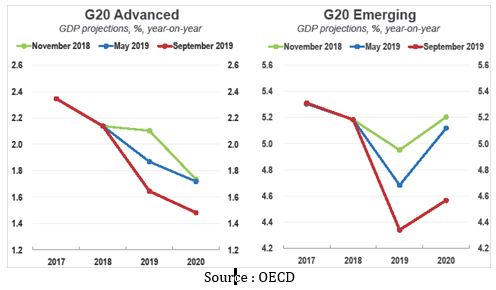 These uncertainties have a major impact on the industrial production sector, as well as on investment growth. A drastic example for this is Germany: In 2017, the industrial production sector had an all-time high growth rate of about +5% – now falling to a negative 5%. All of these factors certainly contribute to falling employment growth rates (especially in the Euro Zone).

Trade tensions and the ongoing Brexit negotiations are starting to harm investment. Specifically, a no-deal Brexit would have large costs. Despite uncertainties, the Outlook shows that it will affect both the UK and EU economies. However, the direct effects will hit the UK much harder, the sector most affected will be transport-equipment, which will face a decline of 24%in production value. Whereas in the EU27, the electronic-equipment sector would suffer the most with a decrease of 1.6%. A no-deal would presumably push the UK in a recession in 2020 and reduce growth in EU considerably. 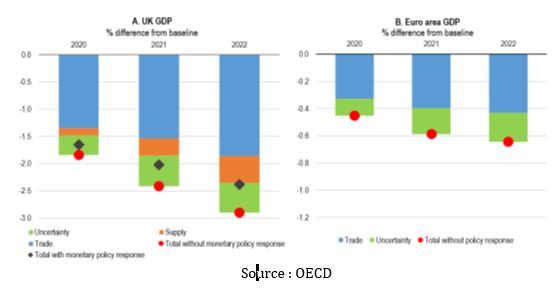 The OECD recommends limiting “reliance on overstretched monetary policy [and to] think fiscal and structural”. In line with the previous Outlook Report, the OECD calls for action on the fiscal front: “There is room in many advanced economies to allow the automatic budgetary stabilisers to operate fully and to implement discretionary fiscal stimulus where needed. The effective nominal interest rates paid on public debt are expected to remain below nominal GDP growth rates for some time, and projected budget balances are higher than those necessary to stabilise debt”.

Fiscal stimulus toned to supplement monetary policies. OECD predictions show that with monetary policy (quantitative easing) alone, the real GDP growth in the Euro zone will stagnate at about 0.1% on the long run. Whereas with fiscal policies (in form of public investment but also with “structural reforms”) it is possible to achieve a long-term growth at about 1.1%. 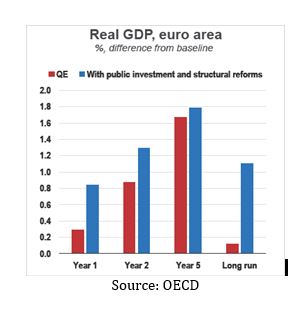 The anaemic growth, and the inaction of governments to take strong fiscal measures would have employment in the future are however not sufficiently highlighted and taken on board in the OECD recommendations. Looking at the numbers on unemployment, the labour market situation has improved lately in several OECD countries. While job creation has picked up in some, job quality and earnings have not in many cases. A downwards spiral could be easily triggered again, worsening the employment situation even more over time and considering the impact of post-crisis structural reforms that have hollowed out labour market institutions, restricting social dialogue and collective bargaining and created more precarious jobs since 2008.

On the positive, the OECD confirms, if proof were needed, that monetary policy is not able to fix growth on its own. Reliance on quantitative easing alone will not deliver and needs to be complemented by more ambitious fiscal stimulus. Public investments and automatic stabilisers (through tax transfers, social protection and safety nets) not only help to sustain solvent domestic demand, but also to contribute towards tackling inequalities. Governments should indeed grab the opportunity of the current zero-bound and in fact negative interest rate environment to engage well-designed and targeted public investment, to support social protection and safety, to effectively be pro-growth and to meet both climate change and digitalisation policies.

The possible outcomes of a no-deal Brexit, and the dramatic impact on the UK economy, as well as key EU trading partners, shows the failure to harness growth with income and territorial inequality matters. A no-deal Brexit combined with weaker growth would inevitably push the UK toward recession in the near future, hitting the most vulnerable, and workers with precarious working conditions and part-time workers. As the British TUC stated recently “A no-deal Brexit must be taken off the table. Now more than ever the voices of the British working people must be heard”.

The OECD calls to combine fiscal support with “structural reforms” should be treated with caution. The uncertainty, as always, is with the substance of the latter – the policy direction and aims of structural reforms. The focus seems to be on increasing competition and access to skills and learning, and less on labour market reforms. Recent OECD recommendations suggest greater focus on social dialogue and sector-wide and coordinated collective systems as mechanisms for better resilience to shocks and downturns, and for better sharing of productivity gains.

More broadly any such policy mix should aim beyond restoring business confidence – especially if, by business, it is shareholders’ and top CEOs’ confidence that is meant. It should aim also at household confidence – restoring middle class power – and worker confidence – ensuring resilient and fair labour market outcomes, including the most vulnerable. There is nothing reassuring in under-estimating the importance of declining employment-growth-rates, deteriorating employment conditions and endangering household incomes.