What are Digital Divides and why do they matter

Digital divides — i.e the unequal access to ICT- has several dimensions, including regional, gender, income distribution. Resolving digital divides also matters in the context of the SDGs. The following briefing offers an overview the issues at stake and, from there, three key policy areas where government would need to take action: (i) public investment to close infrastructural gaps, (ii) targeting affordability through lowering of prices and (iii) developing skills sets and digital literacy.

What are digital divides?

Digital divides refer to the unequal access (or lack of access) to information and communication technology (ICT) across countries, regions or certain sections of the society like low-income earners, rural populations, women, youth or migrants. The global digital divide refers to the technological gap between developed and developing countries. It is a result of a number of socio-economic factors, of which low income, lack of educational attainment, high prices of data and insufficient infrastructure (in particular broadband coverage) are prime causes.

The World Bank’s report on Data for Development in relation to data capacity building efforts in developing countries shows that financial assistance has been rather concentrated in 26 countries which have received financial support of more than $2 million dedicated entirely to developing data systems and technologies (World Bank, 2017). When it comes to uptake in industrialised countries, privacy concerns are another contributing factor as highlighted in OECD’s Digital Economy Outlook 2017: “In 2015, around 3% of individuals in the OECD area said they had experienced an online privacy violation in the last 3 months.” (OECD, 2017) It is thus important to foster data security and privacy to encourage internet use.

Target 9C of the SDGs refers to universal and affordable access to internet, especially in the Least Developed Countries (LDCs) by 2020. As seen above, there is a long way to go in order to achieve universal penetration and adoption of ICT. Policy must aim at providing economic incentives to close the gap of digital divide (including social clauses in public procurement) (Shenglin et al., 2017).

Digital technologies spread rapidly but the benefits have accrued to a small section of society. Only small percentage of the world’s population has access to high speed internet, and around 50% have extremely limited access or none at all (World Bank, 2016). The following map shows the portion of population without access to ICT and the countries which make up this population pointing to a strong link between internet access and income, as well as wealth inequalities. Out of the global population of 7.4 billion people, 4.2 billion do not have access to internet and have not witnessed the digital revolution. This population is mainly concentrated in developing and emerging countries like India, China and Nigeria (80%, 55% and 61% of their populations respectively), but also present in developed countries as in the United States, 51 million people (13% of the population) do not have access to the internet or in some cases could have access but don’t use it. The numbers differ for various social groups: for example, 41% of older people (above the age of 65) in the US do not use the internet. Similarly, people living in rural regions are twice as likely to not use the internet as those living in urban and suburban settings (Anderson and Perrin, 2016). This shows how skewed and layered the distribution of benefits of ICT is across the world. 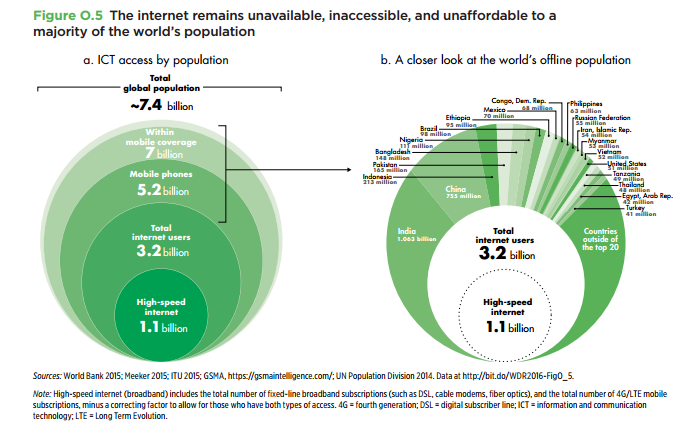 The question of cyber security is also becoming increasingly important as a digital divide issue. Where countries, enterprises or other entities do not provide sufficient security, either due to poor management, or in particular in poorer countries due to insufficient resources, their potential to play a full role in digitally-mediated economic activity is compromised.

The potential for “digital brain-drain” must also be considered. There is an increasing risk that employers will “poach” people from poorer countries, who have tertiary ICT qualifications in particular, rather than investing sufficiently in education and training themselves. In effect this would mean education systems in poorer countries subsidising the skills requirements of multinational companies, and also inhibit the development of digitally-mediated economic activity in poorer countries.

Access to digital technologies by women is lower than that by men in most regions of the world. The internet penetration rates vary substantially, with a smaller lag in the developed countries (82.2% of men use the internet in developed countries whereas 79.9% of women do) as compared to the least developed countries (LDCs) which have a 50% higher internet penetration rate for men compared to women (International Telecommunications Union, 2017). According to the OECD, “250 million fewer women are online than men; and 1.7 billion women do not own a mobile phone” (OECD, 2017). Women face barriers to adoption of digital technologies due to various reasons: lower earning capacity compared to men, lower access to mobile phones (which is the primary medium of going online in low-income countries) and lower education levels (largely due to access to training) which lowers digital adoption compared to men are some of them. 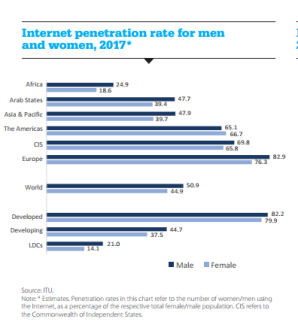 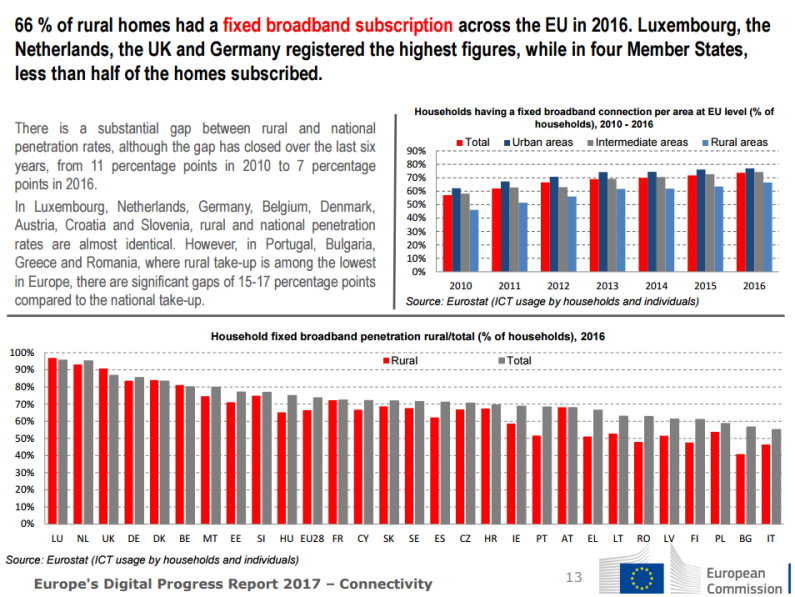 Addressing the digital divides consists of closing the infrastructural gaps to improve access. The framework as put forward by the World Bank consists of categorising supply as the first mile (where the internet enters a country), the middle mile (where it passes through the country), and the last mile (for it reach the end user). For most OECD countries, the infrastructure for the last mile has been from telephone and cable TV based infrastructure from the 1960s to serve mobile and internet networks. However, those developing countries which did not have country-wide infrastructure for telecoms in 1960s have to leapfrog the whole stage of network development and make bigger investments (World Bank, 2017). While they are advocated by some institutions, public private partnerships cannot deliver long-term sustainability goals unless they are put under strong accountability and transparency guidelines, long-term financing commitments or public procurement with social clauses. Due to security concerns, networks should always be under partial public control. Still, there is need for both private and public participation. Yet, in case of last mile connectivity to remote areas, private investors may underinvest due to high costs and low returns. What is needed is:

2. Targeting affordability through lowering of prices

With respect to affordability, the price of internet connectivity can be lowered through government subsidies based on income levels but also to market price controls (Shenglin et al., 2017). Lowering of prices is the primary route to achieving mass market adoption of ICT. The difference between ICT as a necessity good and ICT as a luxury good is roughly around US$10 per person per month — that is, ICT expenditure of US$120 per year is considered as basic necessity (Hilbert, 2010). Since more than 40% of the world population lives on less than US$2 per day, and around 20% live on less than US$1 per day, these income segments would have to spend one third of their income on ICT (120/365 = 33%). This is a large price to pay for internet and acts as a barrier to widespread adoption. Although there has been a global decline in prices for fixed broadband and mobile cellular, policy needs to focus on increasing adoption in rural areas and among lower income sections of the society.

Digital skills are increasingly becoming a complementary competency to the basic skills of reading and writing (World Bank, 2016). Lack of digital literacy and awareness of the potential usefulness of digital technologies is a major cause of lower penetration in some regions. Governments, in addressing such skills gaps, should take a holistic view on educational outcomes and lifelong learning systems that integrate the notion of digital literacy (and STEM) while continue fostering core skills and competencies by:

OECD, 2017, “Going Digital: The Future of Work for Women”. [online]. Available at: https://www.oecd.org/employment/Going-Digital-the-Future-of-Work-for-Women.pdf